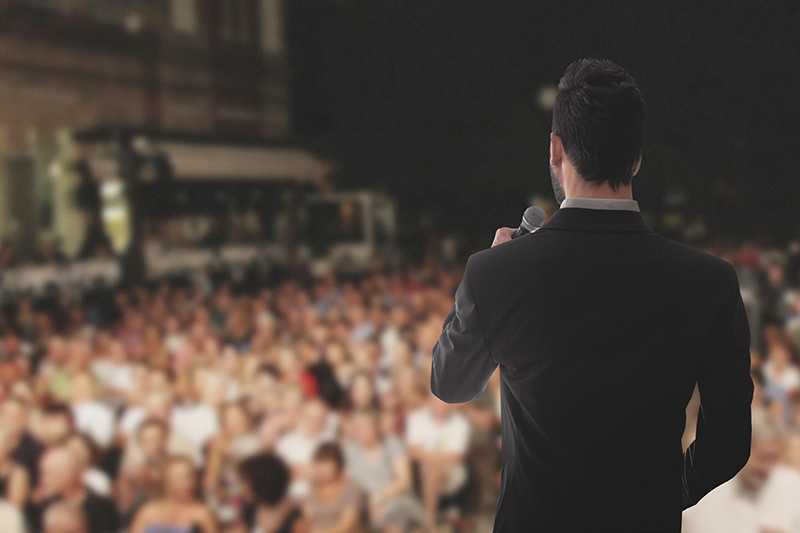 This article is written by Jackie Beere OBE.

Firstly, I had to be honest with myself. I had to admit my fear to myself and the fact that it was becoming debilitating. I then went on to recognise that my fear was irrational – after all, public speaking is not in itself a dangerous activity – but that, even so, it affected me in certain situations. This helped enable me to start to see the actual size of the problem and to get it more into proportion. I began to feel less ashamed and secretive about it and to start admitting to close friends that I was terrified of speaking in public. Often the response would be astonishment: ‘But you seem so super-confident – I don’t believe it!’ Other friends would tell me they felt the same, which made me realise that I was not alone. Strangely, I felt that these fellow sufferers would also be people who could sympathise with me in the struggles which I knew lay ahead, now that I felt strong enough to challenge my fear. Then I began my plan to desensitise my brain.

I consciously got out of my comfort zone and volunteered to help a local village young mothers group. I made sure that I took on a role which would involve having to do a tiny bit of speaking but which I could control the amount of. I avoided being secretary because reading out the minutes would floor me! After a little while I could introduce visitors and contribute to and even help run a few meetings. This boosted my confidence enough to join a local public speaking group. Here I met many people who had all sorts of reasons to be terrified. They ranged from people with stammers and lisps to people with jobs like barristers, aspiring shop managers and sales reps who had to deliver talks or reports or lead and motivate teams or face losing their jobs.

Every week I saw people who were much more afraid than I was, and this was a humbling experience. I would watch the others at my group speak with quivering voices and sometimes with their whole bodies shaking. The empathy and pity I felt often made watching this almost as bad as delivering the speech myself. My stomach would tie itself up in knots and I would live their pain. But seeing them be so brave helped make me even more determined to beat my demons and find a way to break through the fear.

We would all practise delivering speeches to our group using prompt cards and would be evaluated on our performance. Although this was my idea of hell, I was learning a lot about how to speak formally. Every week I constantly reminded myself that I had a massively supportive audience who wanted to give me kind, specific and helpful feedback. I also managed to overcome the initial dread by mentally rehearsing everything going well before the event and learning to focus outwards on the message and the audience instead of inwards on myself. This helped quieten the panicky thoughts inside my head and gradually stopped me getting distracted by them. After each speech I felt elated because I had survived but inside, I still felt that I could never deliver to anyone else outside the safe confines of my group.

Afterwards, in the pub I would challenge myself to speak to, and in front of, others just a little more each time. At community meetings and meetings at work I would ask questions – even though my heart felt that it would beat its way out of my chest. As I was doing this, I developed some useful mantras for challenging my belief that I would never be able to speak in public comfortably. This is what I told myself: ‘I love public speaking and it is what I was born for!’ Nowadays this seems an almost laughable concept, but this thought helped me reframe my negative mindset every time the panic bubbled up inside.

Then one day at my speaking group we upped the ante with an interesting activity – we videoed each other’s speeches. I had given a 5-minute talk on my disastrous attempts at skiing. Later, when I watched the video of me telling the story, I was truly shocked by it. I looked so cool, calm and confident. I couldn’t believe that I could look as if I was enjoying it in the video but feel such panic in my head and body.

This was a turning point for me because I realised that my fear was all about other people seeing me scared and uncomfortable – and feeling sorry for me. But if I didn’t look nervous then it didn’t matter if I felt panicky inside. I could use my breathing strategies and focus on the message, knowing that as far as the audience was concerned I looked confident.

The rest of the story is not a quick fix – it took lots of practice, and lots of courage to take up speaking opportunities, first to very small audiences, and now to very large audiences in the hundreds. It has only been in the last few years that I have been able to tell my audiences in all honesty that ‘I used to be terrified of public speaking’. This often causes astonishment, because I now present with energy, confidence and ease.

Now I really do love public speaking and feel I was born for it. My mantra came true! I am so glad I chose to do the thing that scared me so much. Because now, nothing scares me!

Do something that scares you every day, and take up every possible opportunity to practise speaking in front of a crowd.

Learn more about how to manage nerves and grow to love public speaking in our Level 1 Course: Setting yourself free by overcoming a fear of public speaking.

Find out what support we offer on: